Wedding ceremony in Cambodia may vary as between rural and urban areas, from ancient time to modern days. But the special rules and many traditional rituals are still preserved and respected by Khmer people, which gives a unique and special charm to Cambodia wedding styles. Keep on reading our article to have closer look to one of the most stunning wedding culture in Southeast Asia.

Cambodia has one of the most stunning wedding culture in Southeast Asia.

Cambodian weddings traditionally lasts for three days and three nights. Number “three” is considered to be an especially lucky number by Cambodians because it’s associated with the “three jewels” of Buddhism: the Buddha, brotherhood of monks – the Sangha, and the Buddha’s teachings – the Dhamma. The Khmer wedding ceremony has been inspired by the beautiful legend of the marriage of the first Khmer prince Preah Thong and the Naga princess Neang Neak. Preah Thong was an Indian prince, who set sails to the east to find his own land. One day, his ship approached an island with full of animals and vegetation but no other human inhabitants.

Therefore, he decided to moor the ship and got off to explore that island. In a full moon night, Preah Thong accidentally caught a strange sight, when the ocean’s surface suddenly rippled and there was a group of people emerging from the under water. They were princess Neang Neak – the daughter of the Naga King, and her maids and servants.

The prince and princess fell in love with each other at the first sight and they went to Neang Neak’s underwater kingdom to ask permission from her father. After the Naga King approved, a big wedding celebration was held for three days and three nights. The king then used his magic power to swallow the water to form the land that is now known as Cambodia and presented it to the newlywed couple. From then, Preah Thong and Neang Neak started to build their own kingdom and lived together happily ever after.

Many Khmer wedding customs and ceremonies are believed to be influenced by the marriage of these two legendary persons. 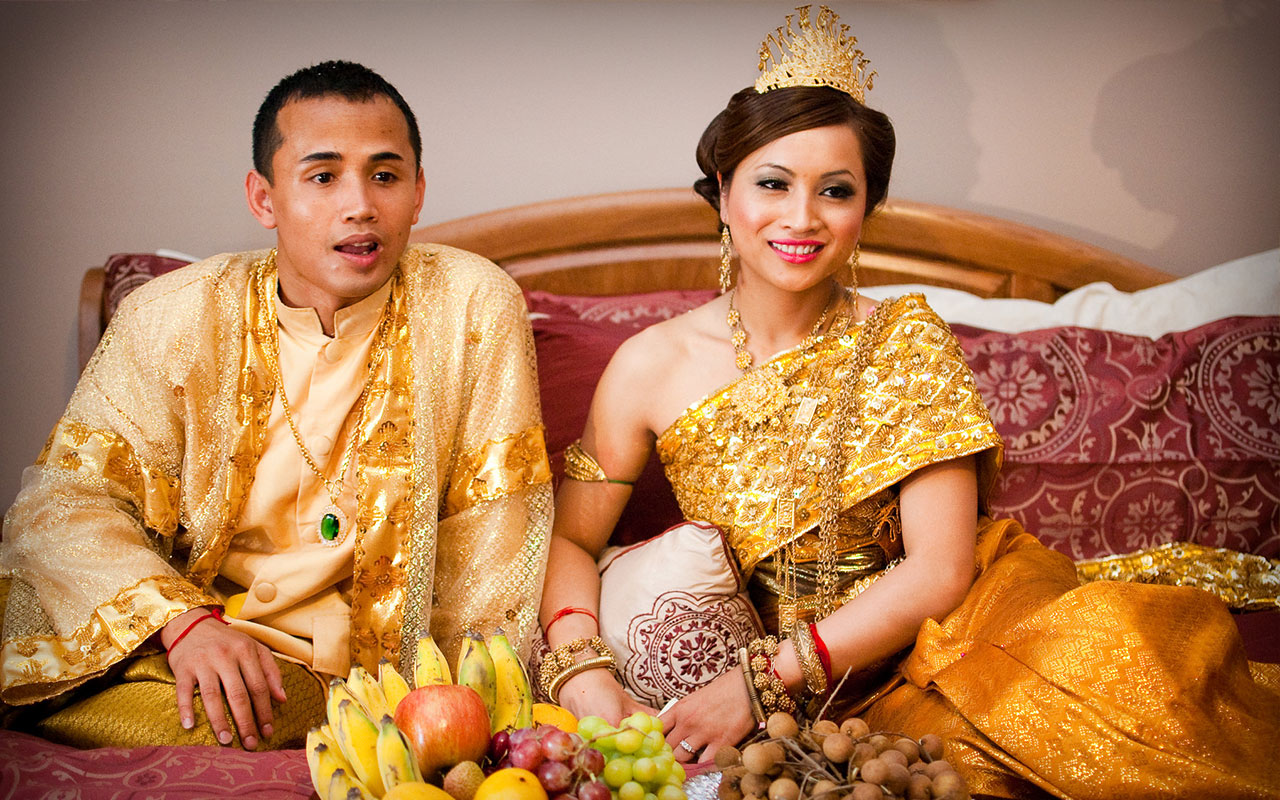 Groom and bride change their outfits’ colors several times to match each ceremony.

Silk is the material used in the Cambodian wedding clothing. The bride wears a tube skirt with a fold in front, a bit similar to the skirt that was popular around with a piece of cloth. The top of bridal clothing is a tube top with a ribbon. Groom wears trousers in the Sampot – a piece of cloth through the entangled pants.

There are many small ceremonies in the Khmer wedding so each ceremony has its own color scheme. Consequently, groom and bride have to change their outfits’ colors to match each ceremony. In addition, bride needs to change her hairstyle and jewelry to elaborate with each ceremony. In general, the couple is attired in matching opulent all-gold silk outfit and have a wedding party of groomsmen and bridesmaids wearing coordinating colors as well. 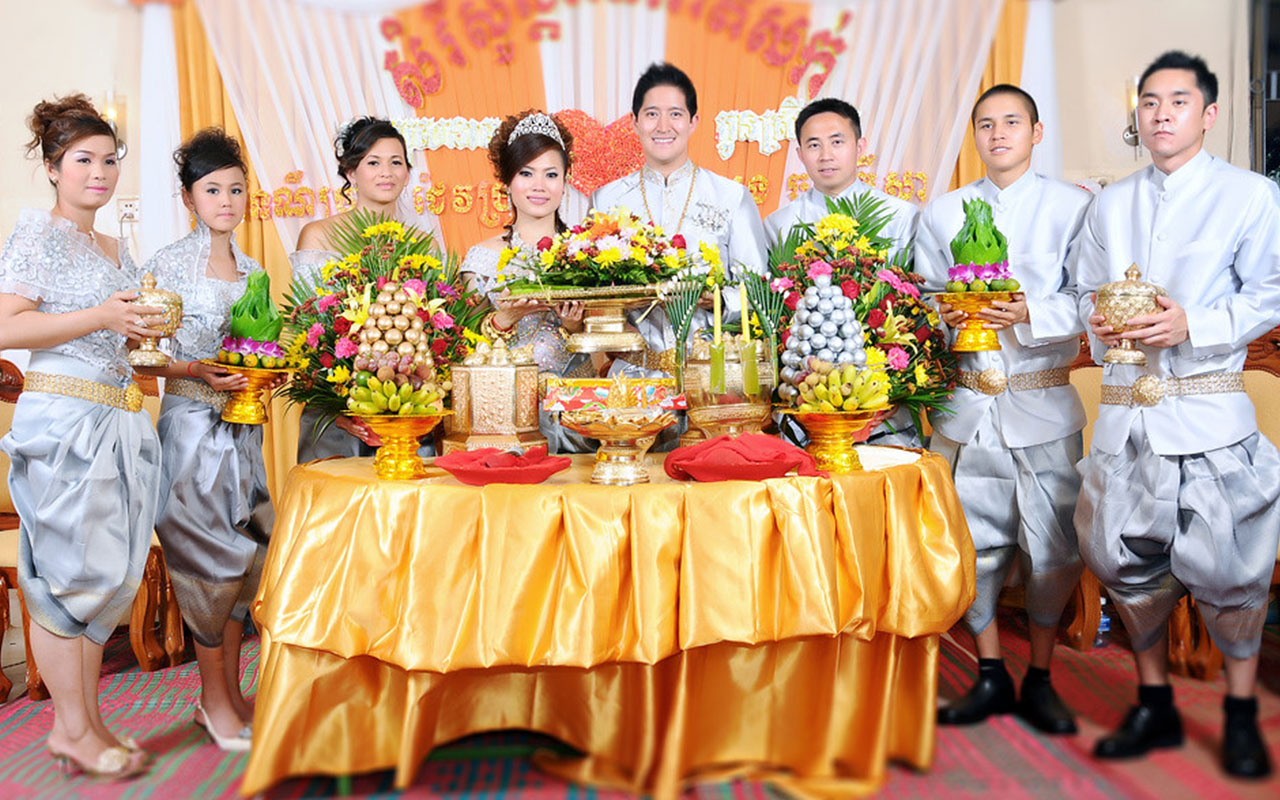 In the past, a traditional wedding in Cambodia is an intricate affair that lasted three days and three nights. Nowadays most families reduce the three-day and three-night event to a one-day and a half affair. But none the less, newlyweds still show their respect to Cambodian culture and valuable traditions and rituals are still maintained in contemporary wedding ceremonies. It could take several months for the spouse and their families to prepare for the wedding. Groom and bride take several different outfits in their lifetime event.

Gold trays of fruits and gifts are arranged on the table.

The order of a traditional Khmer wedding ceremony is taken with 7 steps as following:

Cambodian weddings begin with the groom and his family traveling to meet the bride’s family, bearing gifts for dowry, such as: meats, fruits, pastries, drinks and desserts. Guests are handed matching gold trays of fruits and gifts as they arrive so they can join in the procession, symbolic of his journey to the bride’s home. The trays will be arranged on the table. Family members and friends are introduced, and wedding rings will be exchanged.

The presentation of dowry is illustrated by three traditional songs: 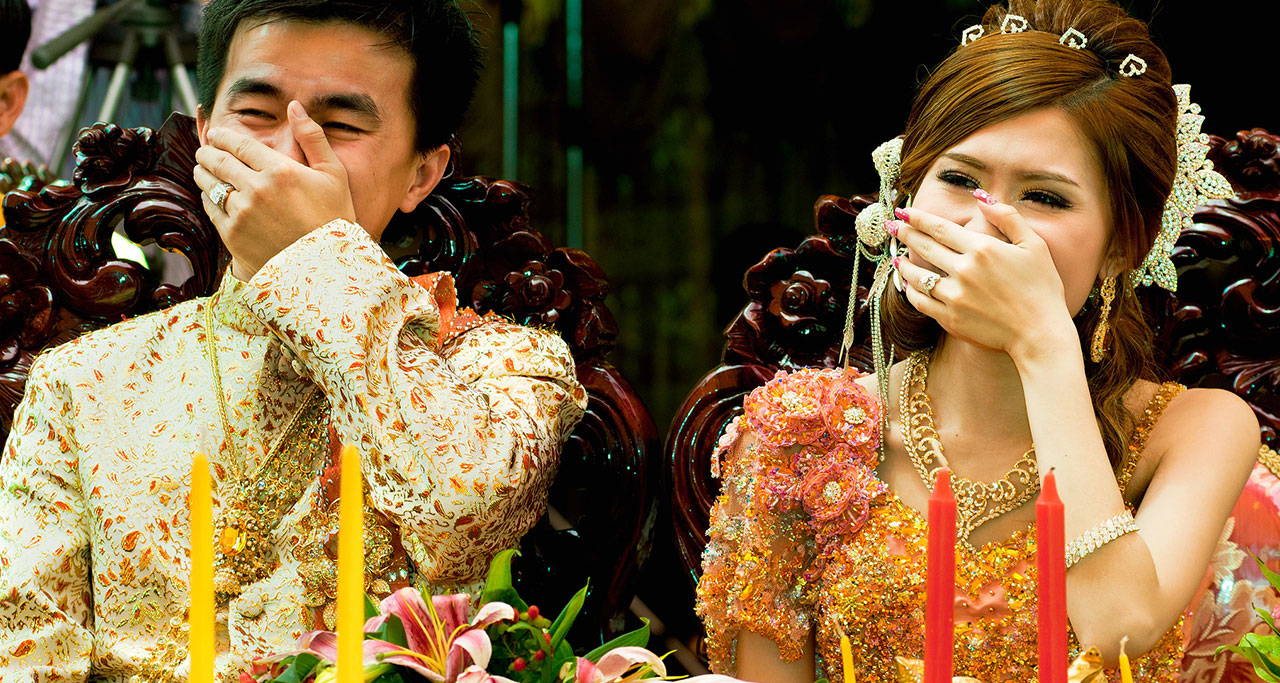 Emotional moments of the newlywed couple in their lifetime event.

This step is called as Tea Ceremony, at which the bride and groom offer tea to honor the spirits of their ancestors. It is a way for them to honor those who have passed before them and to invite their spirit to celebrate their wedding. It is a time to remember those near and dear to their hearts and remember to include them in their important life events. 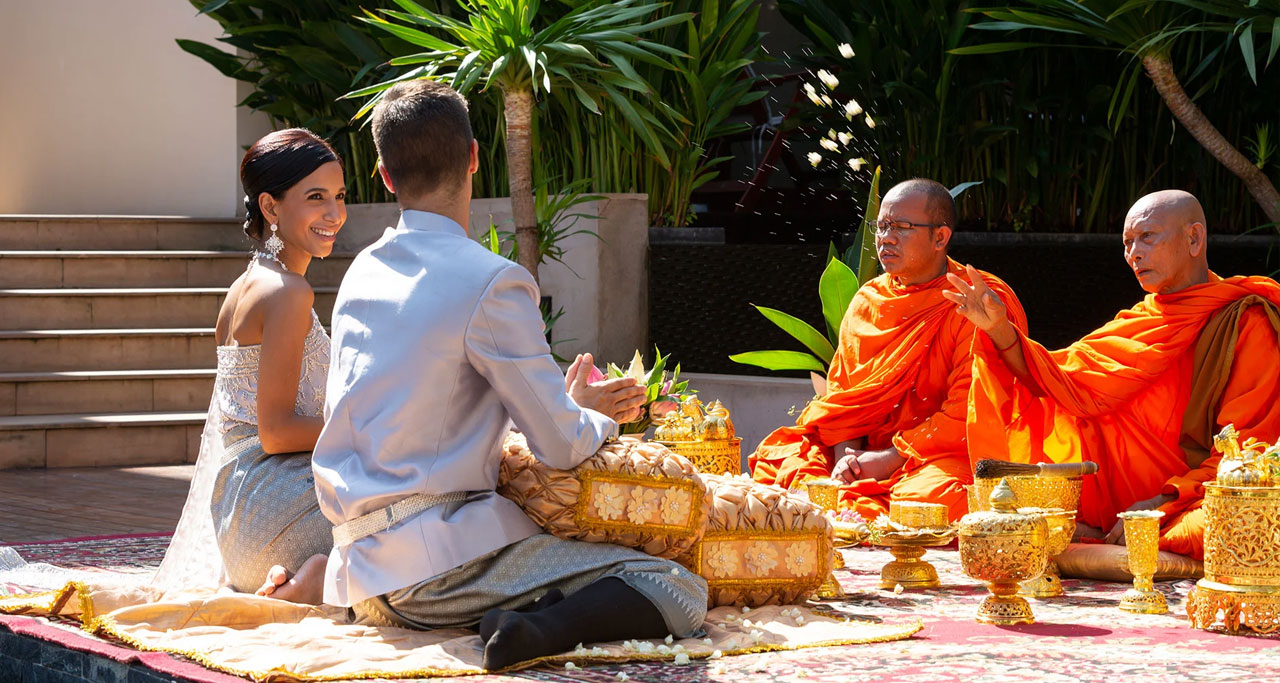 The ritual of monks’ blessing is carried out solemnly so the couple remains quiet with their heads bowed and hands in payer. During this ceremony, monks give special blessings for newlywed couple then sprinkling them with flowered water.

Bride holds umbrellas over parents to expresses the couple’s gratitude.

With the meaning of “holding umbrellas over parents”, this ceremony expresses the couple’s gratitude to their parents. Parents have taken care of them from childhood until mature time. Now they are grown up, get married and take turn to shield and protect their parents. An umbrella is held over the mother to symbolize a reversal in roles of the protective of parents. 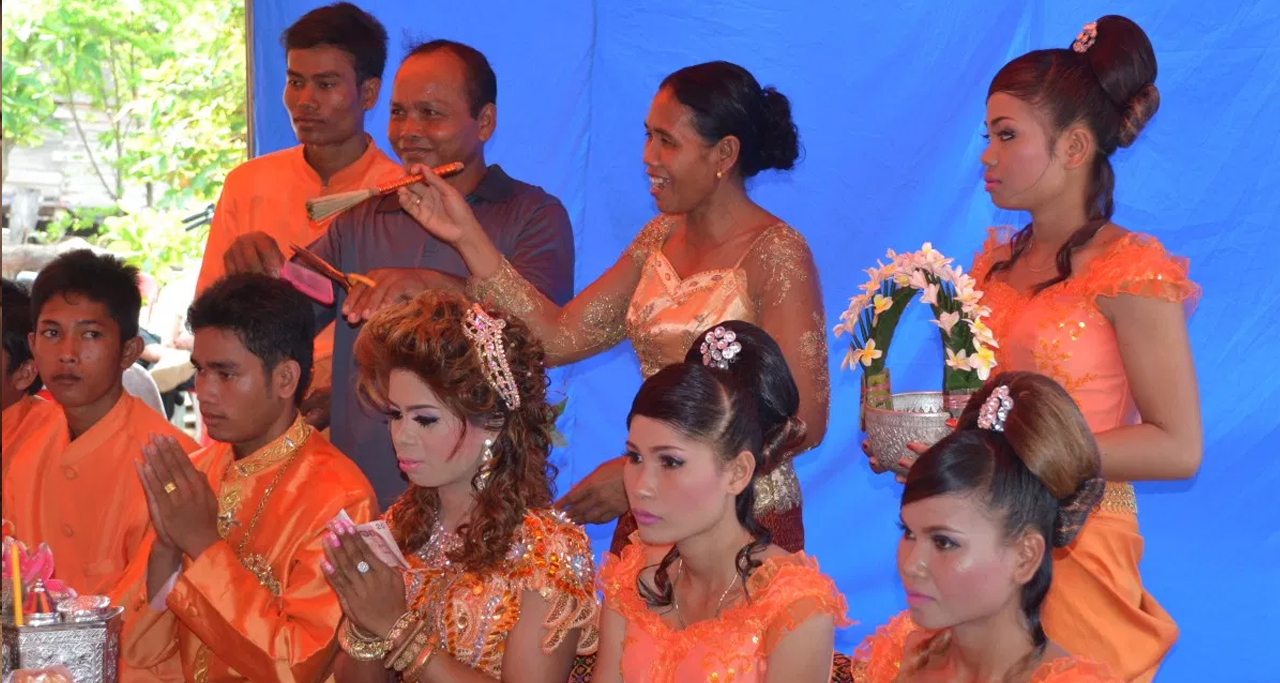 Hair-cutting ceremony represents the fresh start to the couple’s new life together.

Hair-cutting ceremony is a traditional rite in all Cambodian weddings. Bridegroom’s hair was really cut in the old days but this ritual is done symbolically nowadays. This cleansing ceremony represents the fresh start to the couple’s new life together as husband and wife. Family matriarch is the first person given the given the honor to do the symbolic haircut for the couple. Then other relatives and close friends will take turn to perform this ritual with blessings and well-wishes. 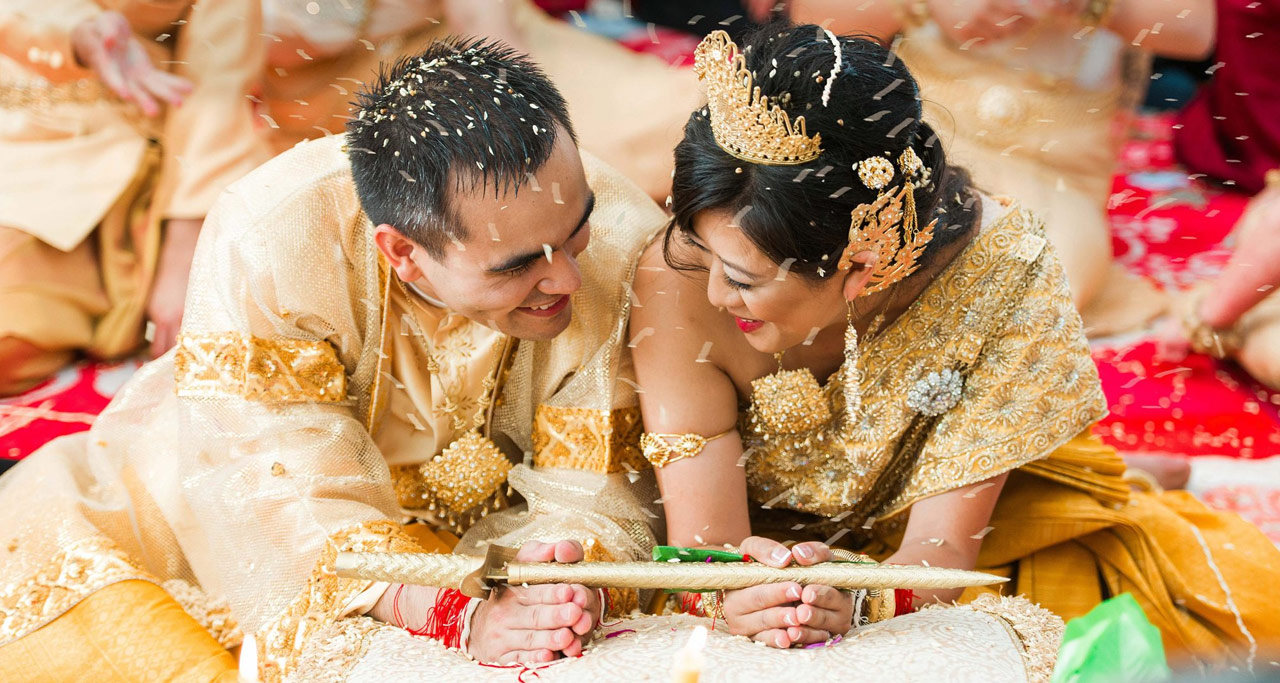 A shower of palm flowers thrown over the new couple.

This is a special ceremony and most memorable stage of the wedding because it symbolizes the new couple’s binding together, which is known as knot tying. During this ceremony, the bride and groom will sit close to each other, put their hands on a pillow and a gold sword is placed in between their clasped hands. The officiants, family members and friends will tie the bride and groom’s left and right wrists with red blessing strings, as they wish the new couple health, happiness, and prosperity.

The red strings are symbolic of two people coming together and their everlasting love. The ceremony concludes with a shower of palm flowers (pka sla) thrown over the new couple. At the end of the knot tying ceremony, the couple will walk clockwise. The groom brandishes his sword in his left hand in protection of his new bride and holds the sbay (part of the Bride’s dress) in his right hand.

Close friends give best wishes for the newlywed couple. 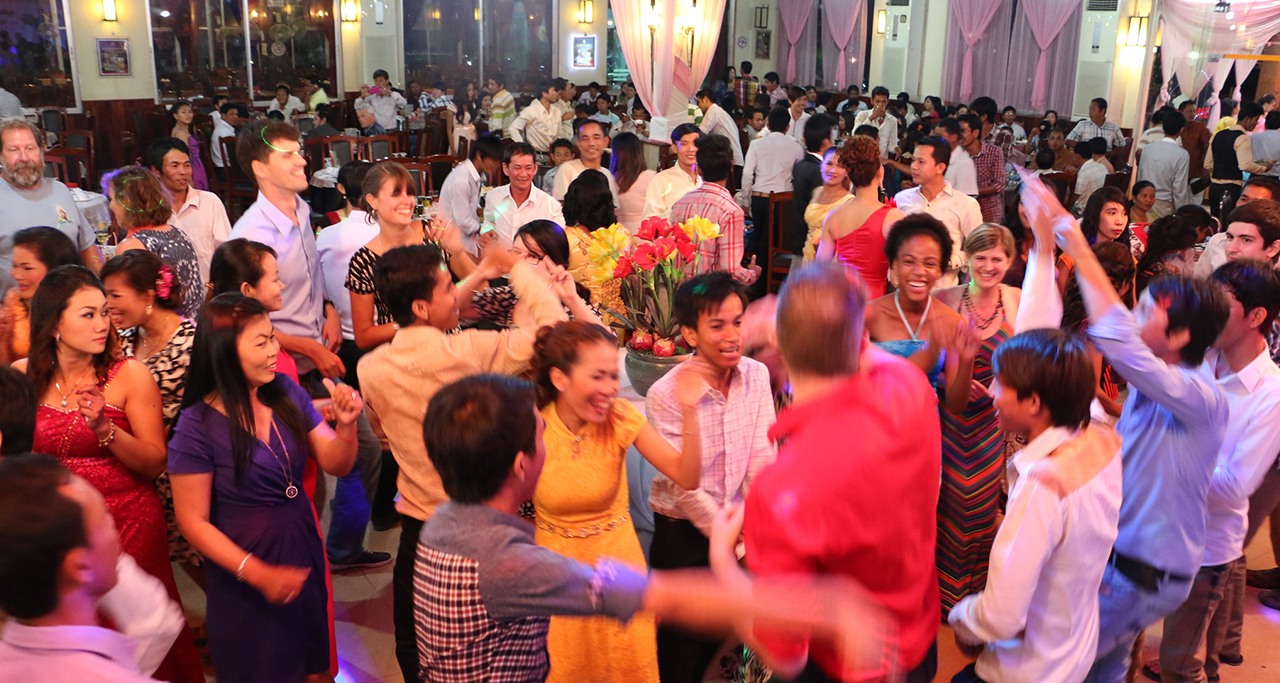 All guests celebrate the wedding ceremony with more songs and dances at late night.

At the close of the colorful wedding ceremony, all of the guests are invited to a sumptuous dinner later at night with more songs and dances to entertain everyone. The traditional dishes range from fish, meat, fruits, vegetables, and sweets.

The wedding is the most special and joyous event in Khmer people’s life. Therefore, modern Cambodians try to maintain this tradition even though it’s quite complicated and takes a lot of time and money.