Cambodian marriage customs are probably the most fascinating tradition of Cambodian culture with rich and long history. Traditional Marriage Customs in this country may vary as between rural and urban areas, from ancient time to modern days. But the special rules and many traditional rituals are still preserved and respected by Khmer people, which gives a unique and special charm to Cambodia traditional marriage customs. 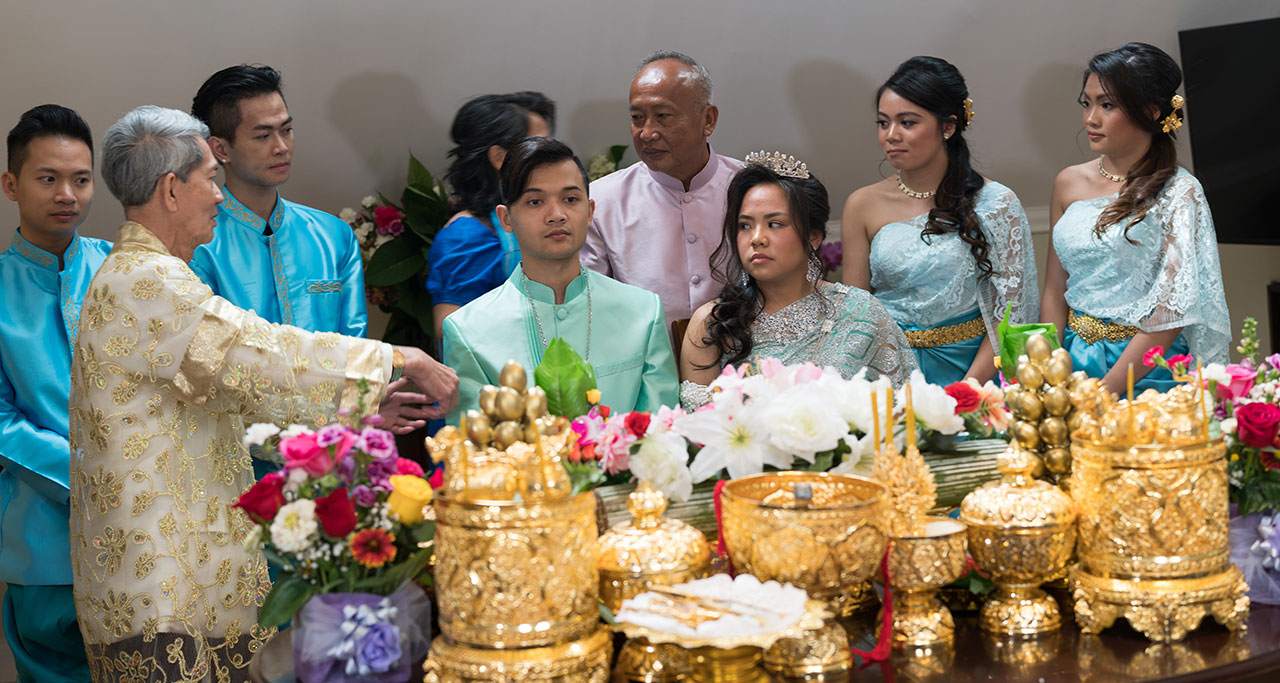 A traditional wedding in Cambodia.

Traditionally, parents are the ones who choose the future spouse for their children, sometimes with the help of a matchmaker. In some cases, parents knowing each other in advance arrange marriages between their children. Meanwhile betrothed individuals even don’t know well about the person that they will marry. When the process of selecting spouse is finished, a go-between discusses the proposal with parents. Each family will study about the other to make sure that their offspring will marry into a good family. 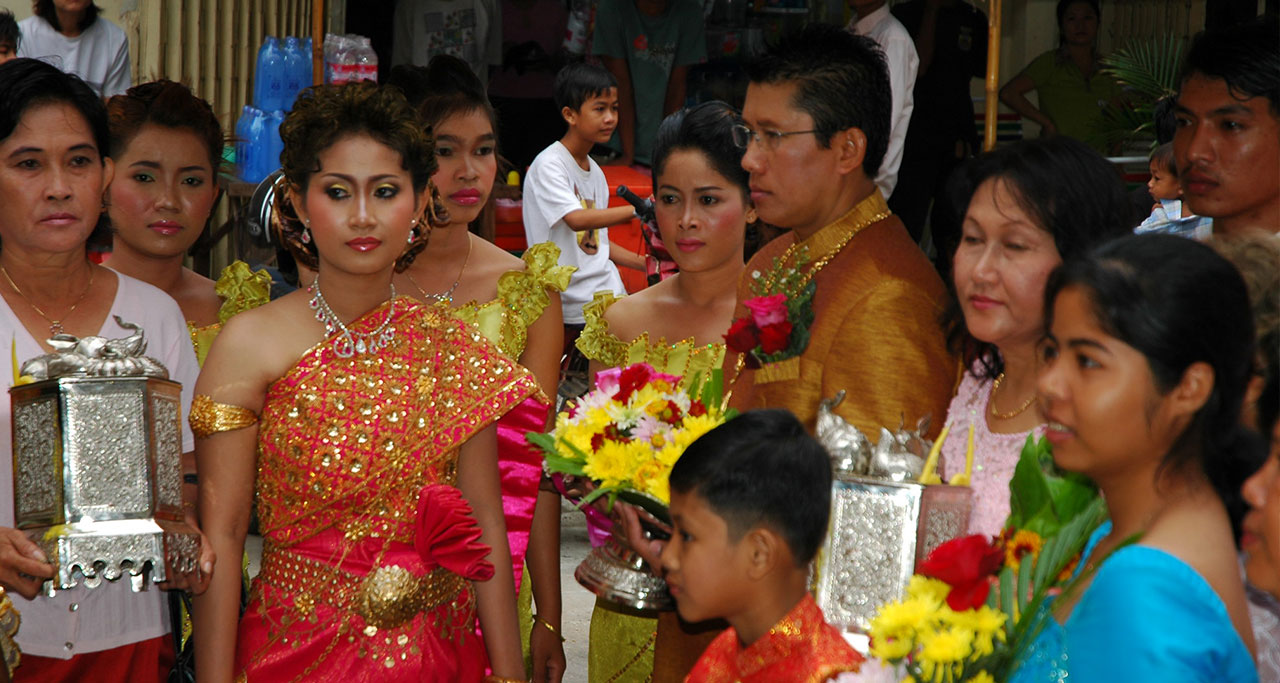 Cambodian weddings start when the groom and his family bring presents and travel to the bride’s home.

When the marriage is approved by both sides, the families will set the wedding date and other related customs. The tradition of bride-service is practiced in rural areas, in which the fiance goes to the future bride’s parents and serve his prospective father-in-law for a period of time. The common marriage period of Cambodia men is at around the age of twenty to twenty-five while the women can get married when they reach the age of sixteen to twenty-two.

Due to the influences of globalization and Western lifestyles, young Cambodians now have more freedom to choose spouse on their own will. However, conservative traditional customs are still persisted, like asking the advice and approval from their parents before deciding to get married. That’s also an expression of children’s gratitude towards their parents. In addition, marrying into a good family is considered to be a way of returning gratitude, especially for a girl or young woman. 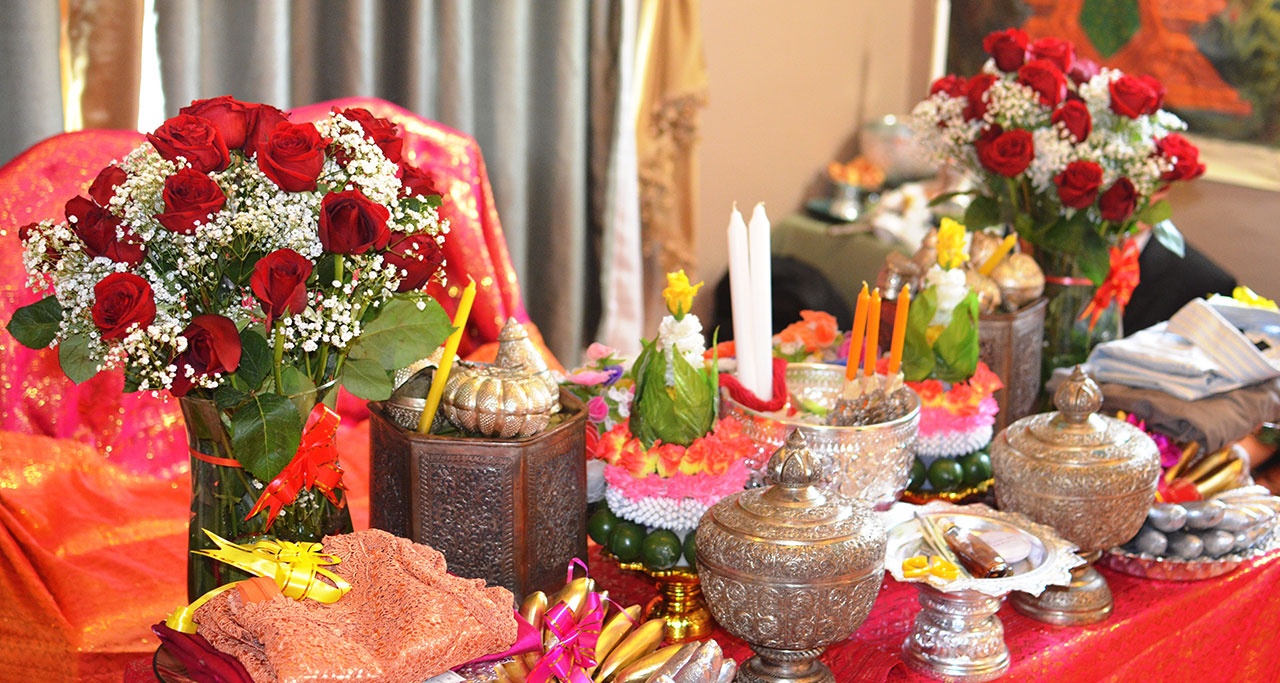 Dower is prepared by the groom and his family, in response to his parents-in-law’s requests.

Dowry and dower are both related to traditional customs in wedding but have contrast meaning. A dowry is the property from the bride’s parents to their daughter at her marriage. Meanwhile, dower is the property which is prepared by the groom and his family, in response to his parents-in-law’s requests.

Dower is an ancient custom which is expected and demanded as a condition to accept a marriage proposal in Cambodia, as well as in parts of Asia, Northern Africa and the Balkans. The quantities of dower are demanded by bride’s parents and needs to be accepted by groom’s families before the marriage. In Cambodia, a man has to meet the requirements of dower from future parents-in-law, as well as pays all expenses of the wedding ceremonies.

The bride’s parents can ask for huge dower as a demonstration that her future husband has ability to care for his wife in their new life. Marriage is not just the story of the young couple but between two families. Large dower is symbolized for the prominence of the bride and also the evidence that the groom’s family has good financial status.

Even grown up in not a rich family, a Cambodian man will try as hard as he can to earn enough money to meet the dower request from his parents-in-law and responsible for wedding ceremony expenses. That’s the way to prove his deep and sincere love with his future wife, as well as claim that he will be a good provider and good husband in marriage life. 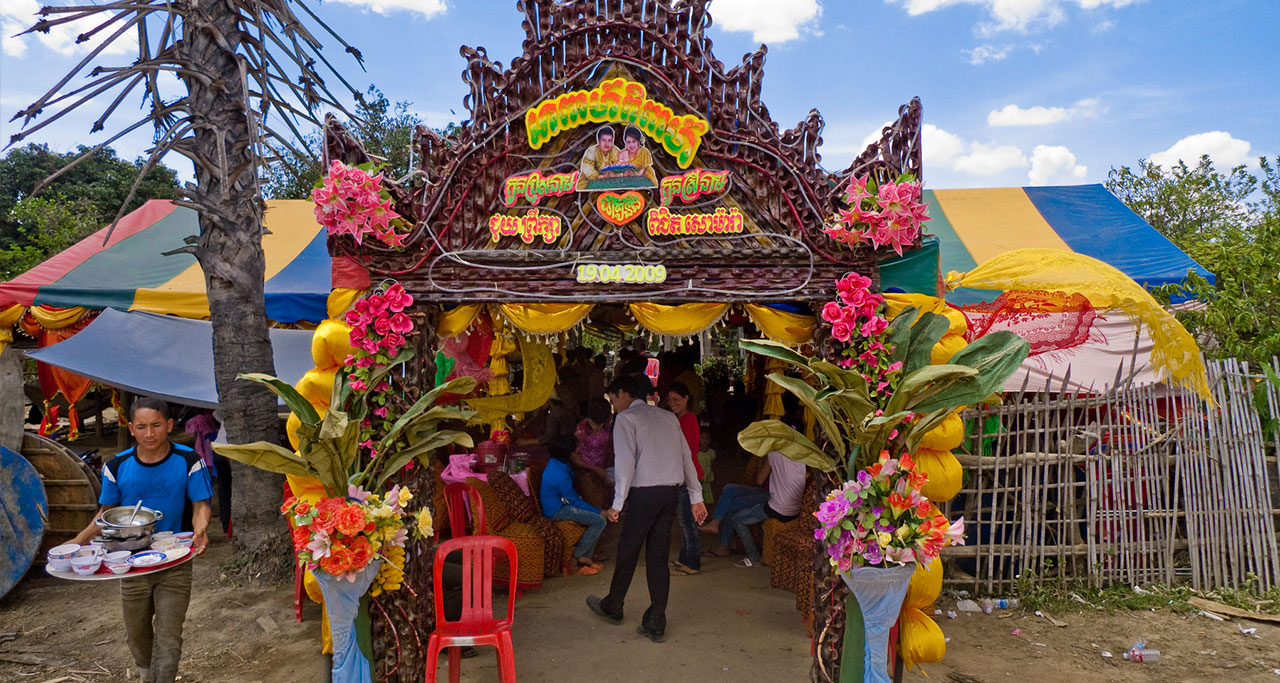 Bride and groom’s house are decorated with flowers and festive colors in wedding day.

In the past, a traditional wedding in Cambodia is an intricate affair that lasted three days and three nights. Nowadays most families reduce the three-day and three-night event to a one-day and a half affair. But none the less, newlyweds still show their respect to Cambodian culture and valuable traditions and rituals are still maintained in contemporary wedding ceremonies. 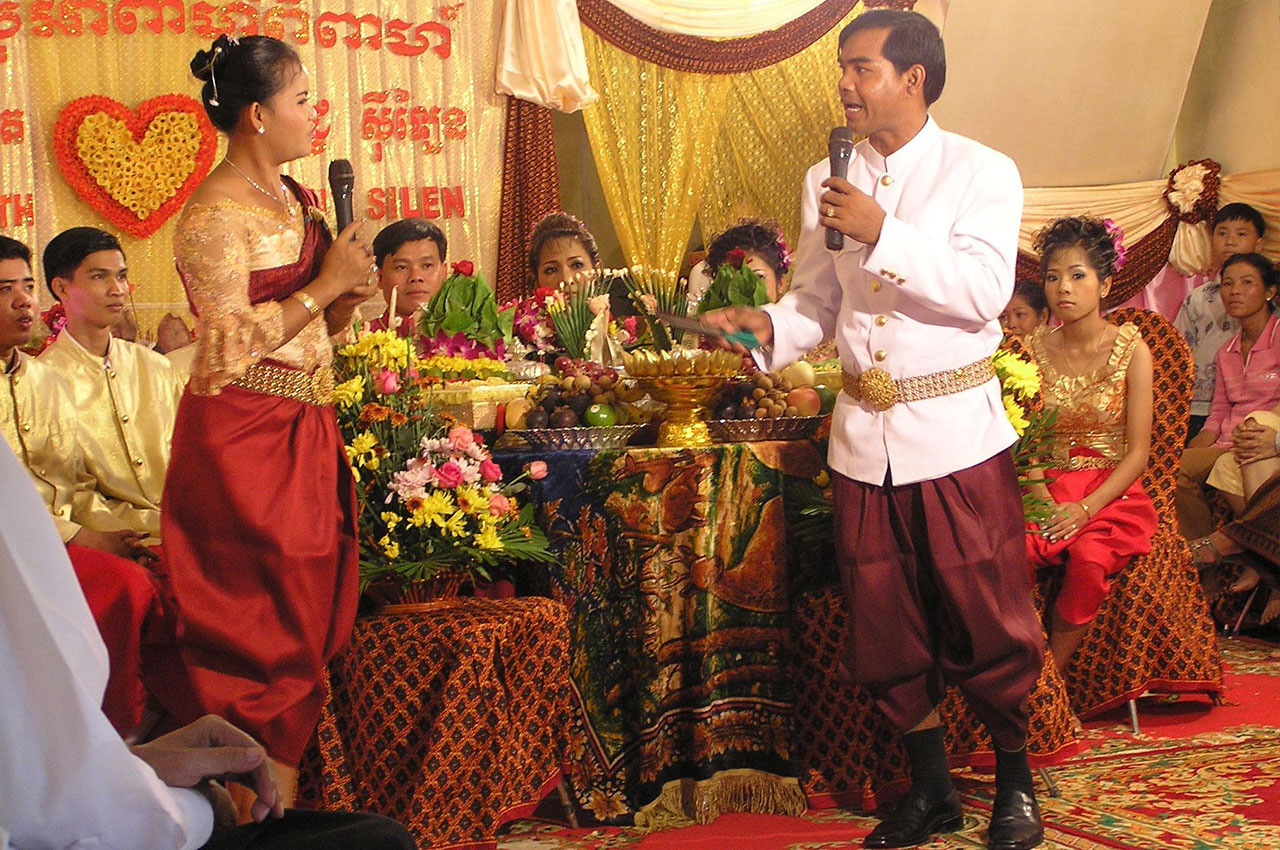 Live music performance is an integral part in all Cambodian weddings.

It could take several months for the spouse and their families to prepare for the wedding. Groom and bride take several different outfits in their lifetime event. Various wedding rituals of Cambodian have been inspired by legend about the marriage of Khmer Prince Preah Thong and the Naga Princess Neang Neak.

The order of a traditional Khmer wedding ceremony is taken with 7 steps as following:

Cambodian weddings start when the groom and his family bring presents and travel to the bride’s home. All family members of both sides are introduced and then followed by the exchange of wedding rings between the groom and bride.

3.2. Sien Doan Taa.
The couple offers tea to their ancestors’ spirits. It is the way to express their honor to ancestors and invite their spirit to celebrate their wedding ceremony.

3.3. Soat Mun.
The solemn ritual is taken by Buddhist monks. Monks sprinkle the couple with flowered water white chanting them their special blessings.

3.4. Bang Chhat Madaiy.
This ceremony includes the action of holding umbrellas over parents by the marriage couple. This’s used to honor and thank the couple’s parents by reversing their roles to protect their parents.

3.5. Gaat Sah.
Literally translated into “cutting hair”, this ceremony implies a symbolic haircut for groom and bride. It means to cleanse the past and they will ready to start their new life together.

Known as “knot tying”, this special ceremony symbolizes the new couple’s binding together. During this ceremony, the couple will kneel down while holding a gold sword in between their clasped hands. Meanwhile, family members and friends take turns to tie red strings around the bride and groom’s wrists. The red strings are symbolic of two people coming together and their everlasting love. The ceremony concludes with a shower of palm flowers thrown over the new couple and many wishes of the health, happiness, and prosperity for newlywed couple.

3.7. Bongvul Pbopul.
The groom and the bride are blessed by the married couples, who sit in circle around them. This represents the passing of blessings to the newlyweds.

At the end of the wedding ceremony, all guests are invited to participate in a wedding reception accompanied by an orchestral concert.

It can be said that marriage customs in Cambodia incorporate with local culture and heritage. Although several weddings have adopted Western style lately, there are still many parts of traditional customs persisted and maintained. During your vacation in Cambodia, Cambodia Travel guides are more than happy to help you understand more about this authentic tradition with memorable experiences.