Phnom Penh Capital – the heartbeat of Cambodia, is where modern and old collide. From stunning architecture, both ancient and New Khmer and from French colonial period, as well as its recent tragic history, Phnom Penh still retains its own charm and therein gives a more unspoiled Southeast Asian experience. For more ideas on places to visit, keep on reading our suggested list of top 10 attractions in Phnom Penh.

Royal Palace is the striking structure conveniently located near the riverfront in Phnom Penh. The spired-roof pavilions and ornate decoration of the complex are excellent examples for classic Khmer architecture. There are 4 main structures in the complex: the Khemarin Palace, the Inner Court, the Throne Hall and the Silver Pagoda.

Being the seat and residence of Cambodia’s royal family since the 1860s, half of the compound is closed to the public. Tourists are allowed to visit the Throne Hall and adjacent Silver Pagoda which is set within manicured gardens. The Throne Hall being seen today was built in 1917 to replace the earlier wooden structure. It is topped by a 59m-high tower inspired by the Bayon at Angkor. Coronations and important ceremonies like presentation of credentials by diplomats are taken place in this hall. 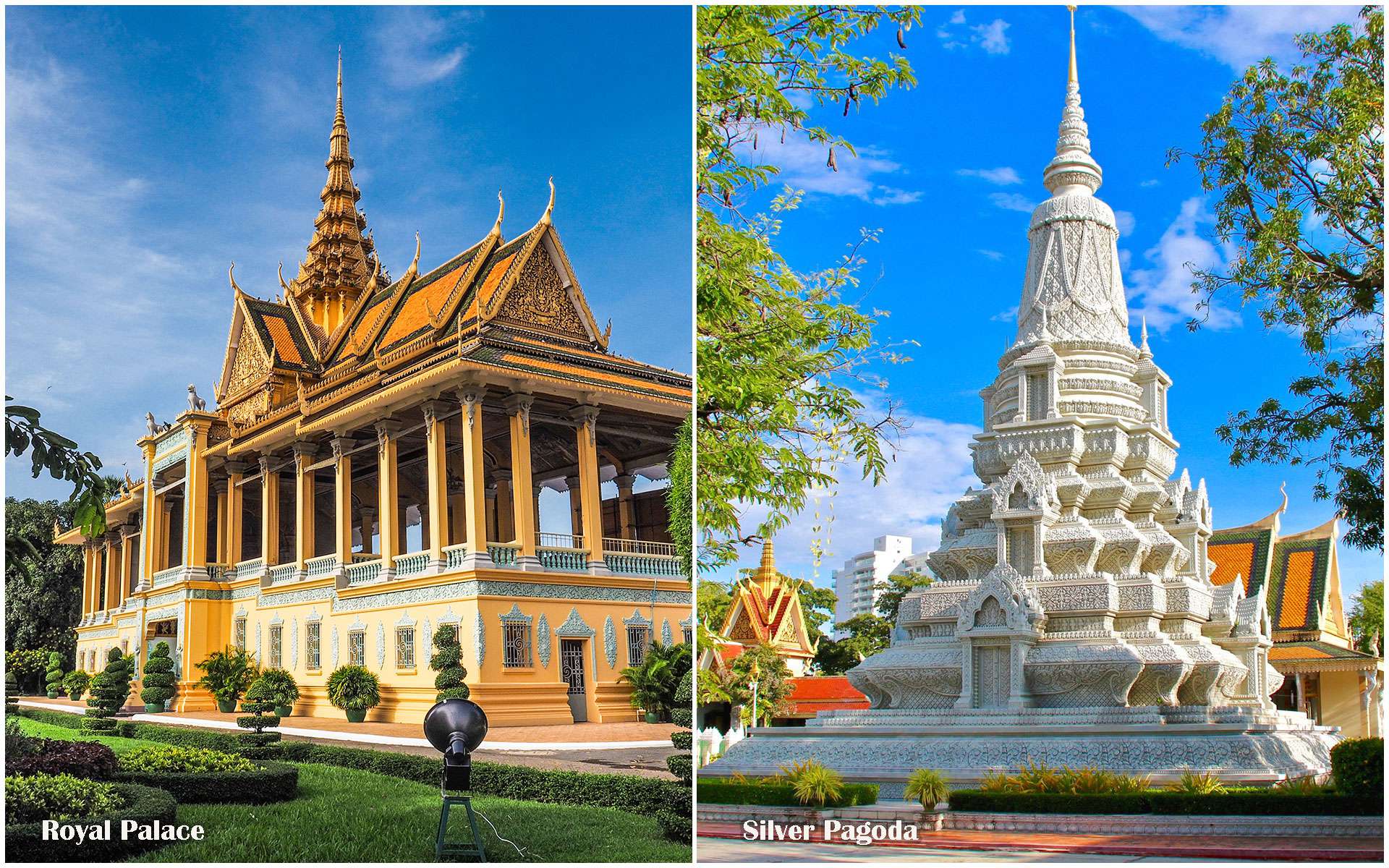 The Silver Pagoda gets its name as the floor is covered with 5 tonnes of gleaming silver. It was originally built of wood in 1892 with the inspiration from Bangkok’s Wat Phra Kaew, then rebuilt in 1962. Therefore, visitors are surely amazed by the Emerald Buddha statue and a life-sized gold Buddha statue studded with 2,086 diamonds. The interior ceiling murals of the pagoda are stunning examples of extraordinary Khmer artisanship with depictions of the Cambodian epic poem, the Reamker based on the story of the Indian Ramayana.

All visitors must dress appropriate clothes covering their knees and shoulders. Photography is prohibited inside the Silver Pagoda.

Not only the largest architectural and historical museum in Cambodia, the National Museum in Phnom Penh is also home to the world’s finest collection of Khmer sculpture. Being constructed from 1917 to 1920, the museum itself is an example of traditional design with a graceful terracotta structure and a serene courtyard garden. Anyone with special interest in Cambodian history should not miss the chance to visit National Museum. 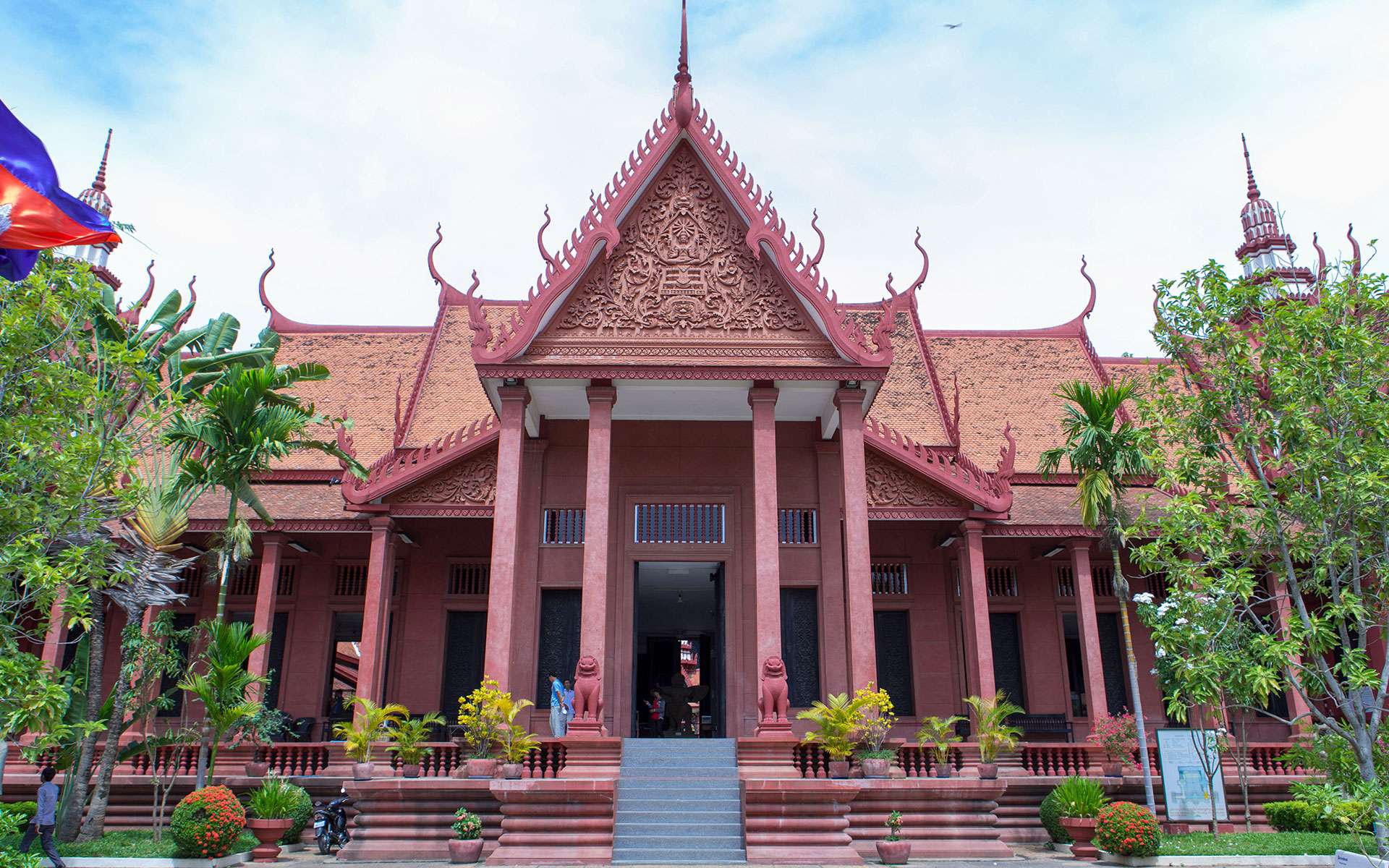 The graceful terracotta structure with traditional design of National Museum in Phnom Penh.

It houses the large exhibits of artifacts dating from Funan and Chenla periods (pre-Angkorian) from 4th to 9th centuries; and the classical Angkorian period from 10th to 14th centuries.
The visit normally starts from left side and continue in a clockwise direction and follow chronological order.
Photography is only allowed in the museum exterior and courtyard, and not permitted inside the museum.

Located right in the heart of Phnom Penh, Toul Sleng Genocide Museum preserves a tragic period in Cambodia’s history during the Khmer Rouge regime. In 1975, Pol Pot’s security forces took over Toul Svay Prey High School in Phnom Penh and converted it into Security Prison 21 (S-21). Within four years (from 1975 to 1978), more than 14,000 people were imprisoned and tortured here, which made it become the largest center of detention and torture in the country.

Toul Sleng used to be a high school before being converted into the Security Prison during the Khmer Rouge regime.

Displays in the museum focus on main topics: the Khmer Rouge period, the living conditions of prisoners and the impact of this dark period on the present Cambodian society. The visit to Toul Sleng is really a depressing experience, especially more visceral by the displayed photographs of victims hanging on the walls. But the visit there is recommended for those who want to get greater sight about Cambodia bloody history and admire Khmer people’s strong resilience.

Toul Sleng Museum serves as a testament to the crimes of the Khmer Rouge and encourages visitors to be messengers of peace.

Located 17 km south of Phnom Penh city center, Choeung Ek Killing Fields is the site of a former orchard and mass grave of victims of the Khmer Rouge between 1975 and 1979. During this period, more than 17,000 victims were sent to their deaths at Choeung Ek extermination camp, many of them came from S-21 Prison after detention and torture there. Among 129 mass graves here, 86 that have been excavated, exhuming the remains of 8,895 bodies after the fall of the Khmer Rouge regime. There is a memorial stupa at the center of Choeung Ek, which contains an acrylic glass case with over 5,000 human skulls. 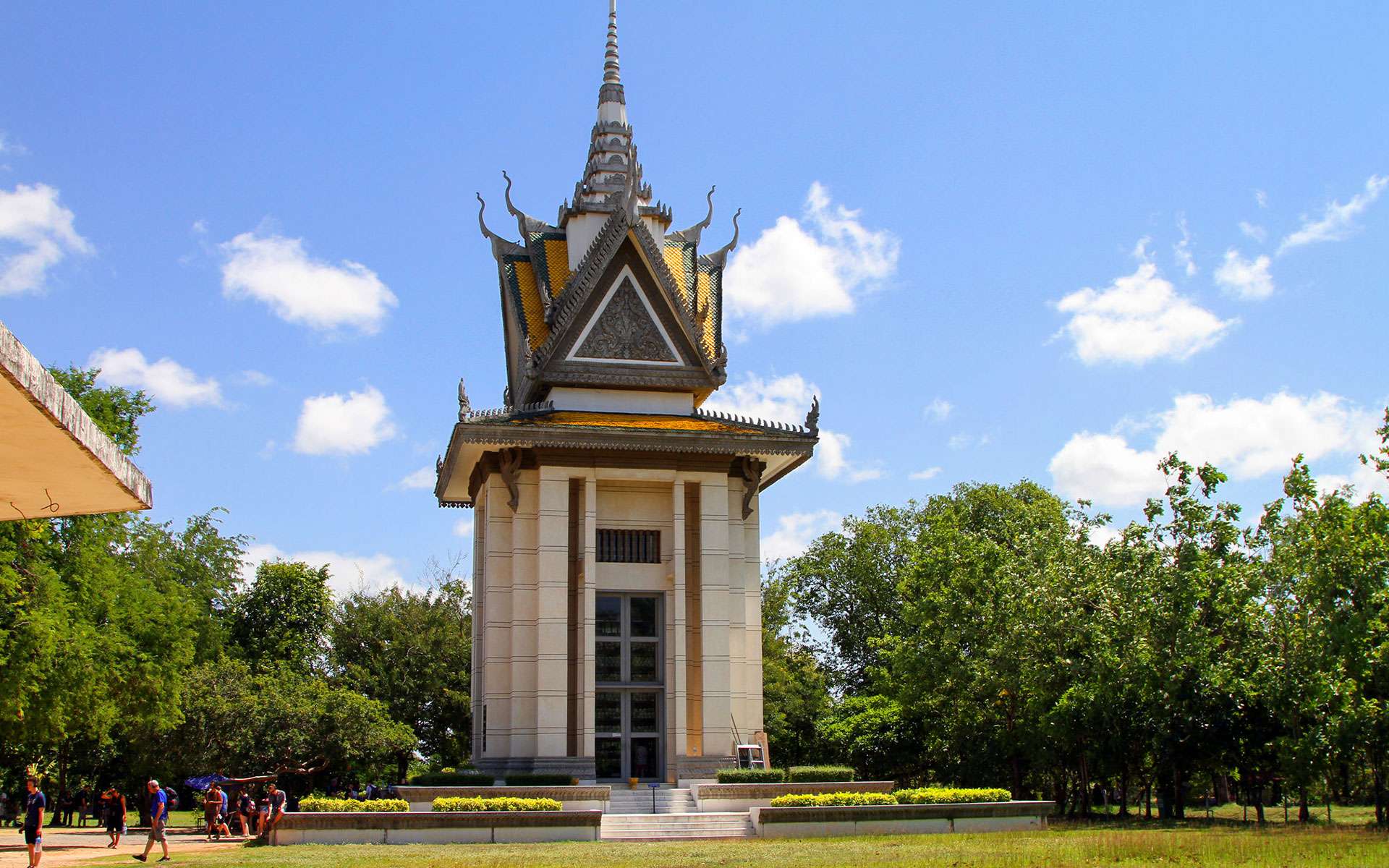 The memorial stupa at the center of Choeung Ek contains an acrylic glass case with over 5,000 human skulls.

Upon arrival at this memorial field, tourists will be given a headset that will guide them through the exhumed graves and tell the bloody stories in the past. Even it’s a somber experience, it helps tourists understand more about how Khmer people have remained resilient and strong during tumultuous period in Cambodia’s modern history.

Psar Thmei, or widely known as Central Market, is a landmark itself due to the impressive art deco design by French architects. Located right in the heart of the city, this huge golden domed structure resembles a Babylonian ziggurat and used to be ranked as the biggest indoor market in Asia when it first opened in 1937. Even on a sweltering day, the market’s central hall is still cool an airy thanks to its excellent ventilation system. Psar Thmei was renovated by the fund from French Development Agency from 2009 to 2011 and now is in good shape. 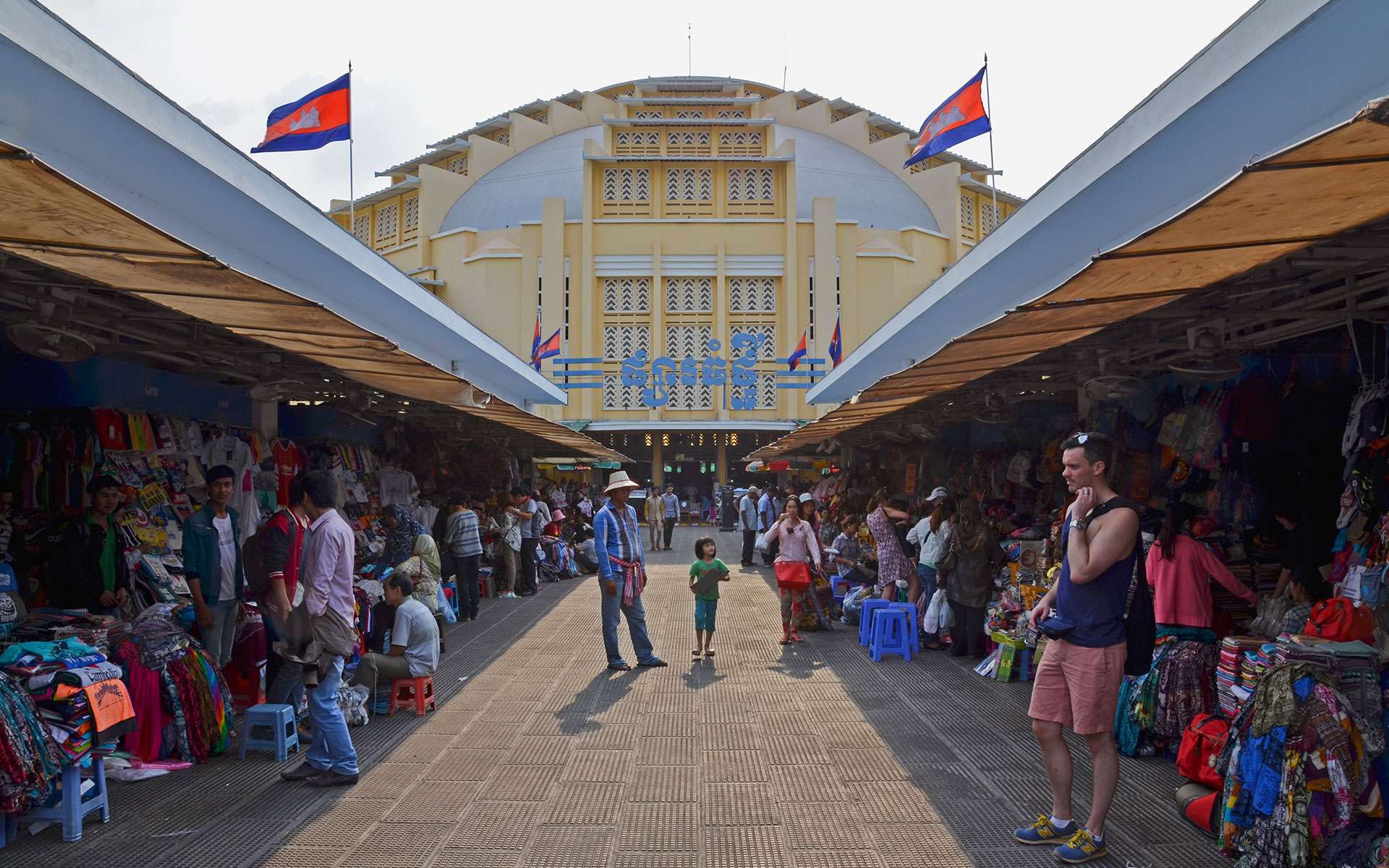 The four diagonal wings are filled with stalls selling silver and gold jewelry, antique coins, fake name-brand watches and other such items. Right at the market’s entrance, tourists will be impressed by souvenir merchants hawking everything from T-shirts and postcards to local handicrafts. When you are hungry, there is plenty of food stalls and colorful fresh produce sections offering classic local dishes.
In spite of the overcharged prices on most products, Phsar Thmei is still the best market in the city for an aimless wander, and photography opportunities.

Russian Market is situated in the southern part of the capital city and locally known as Phsar Toul Tom Poung. It earned its moniker as “Russian Market” because during the 1980s, the predominantly Russian expats living in Phnom Penh shopped here. From the outside, it doesn’t look like much but when entering inside, tourists will have opportunities to soak up a slice of local life here with the market’s huge arrays of local produce on display. 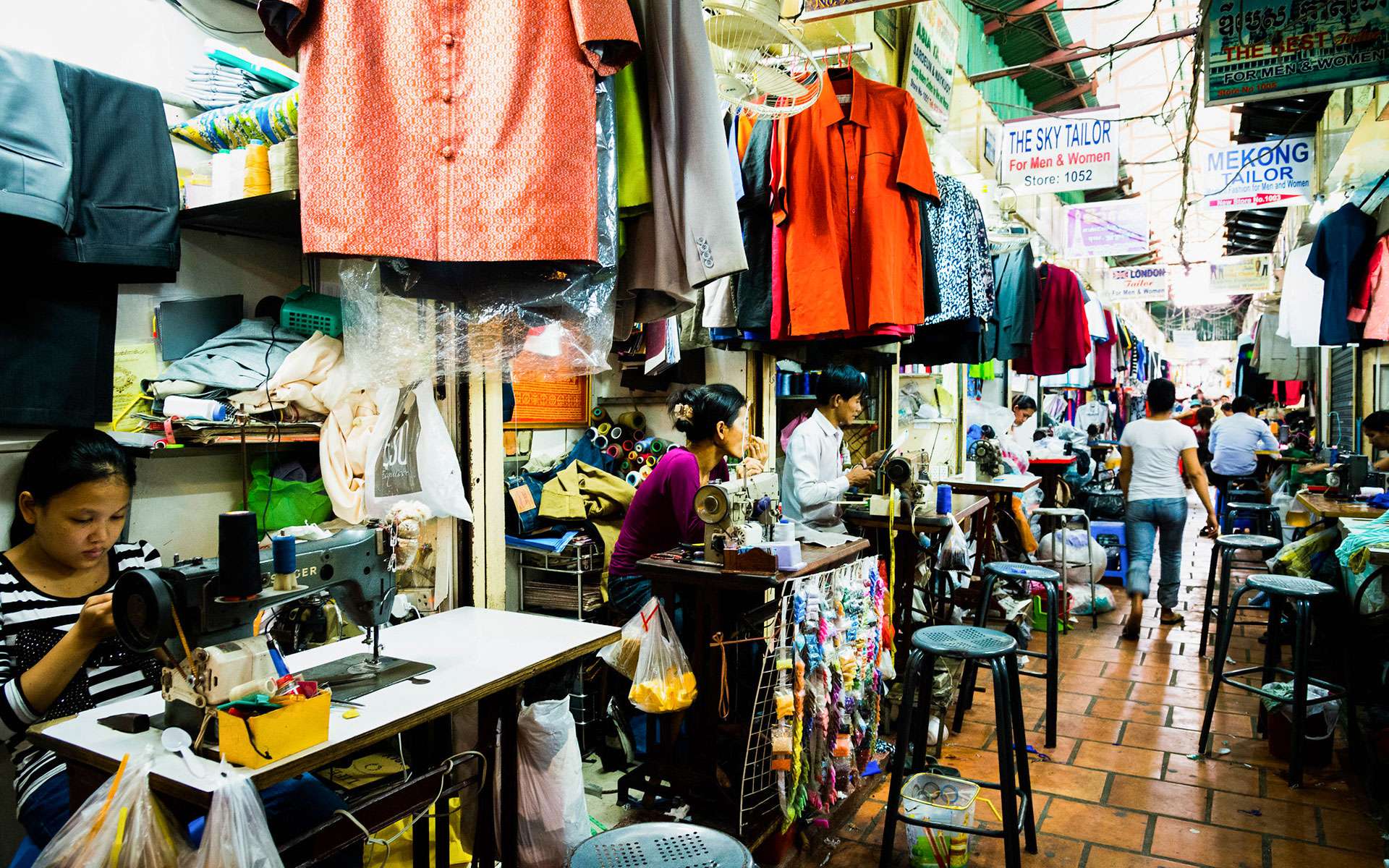 Russian Market offers countless chances for tourists to soak up a slice of local life with huge arrays of local produce on display.

A little bit of everything can be found here, like Cambodian silks, local handicrafts, discounted name-brand clothing, musical instruments, silver jewelry and so on. It will be an interesting experience to try out your bargaining skills here.

This narrow and sometimes sweltering market shouldn’t be visited during midday. So plan for an early morning or late afternoon visit.  When the hunger strikes, don’t worried because there are some local food stalls around Russian Market.

Wat Phnom – a Buddhist pagoda, stands on a 27 m high tree-covered hillock at the central point of Phnom Penh and is the tallest religious structure in the city. Legend says that a wealthy widow named Penh found a large koki tree on the riverbank of Mekong River. There were four sacred Buddha statues inside the tree. Therefore, Lady Penh gathered nearby residents to construct an artificial hill and erected a shrine on top to protect these sacred statues in 1372. 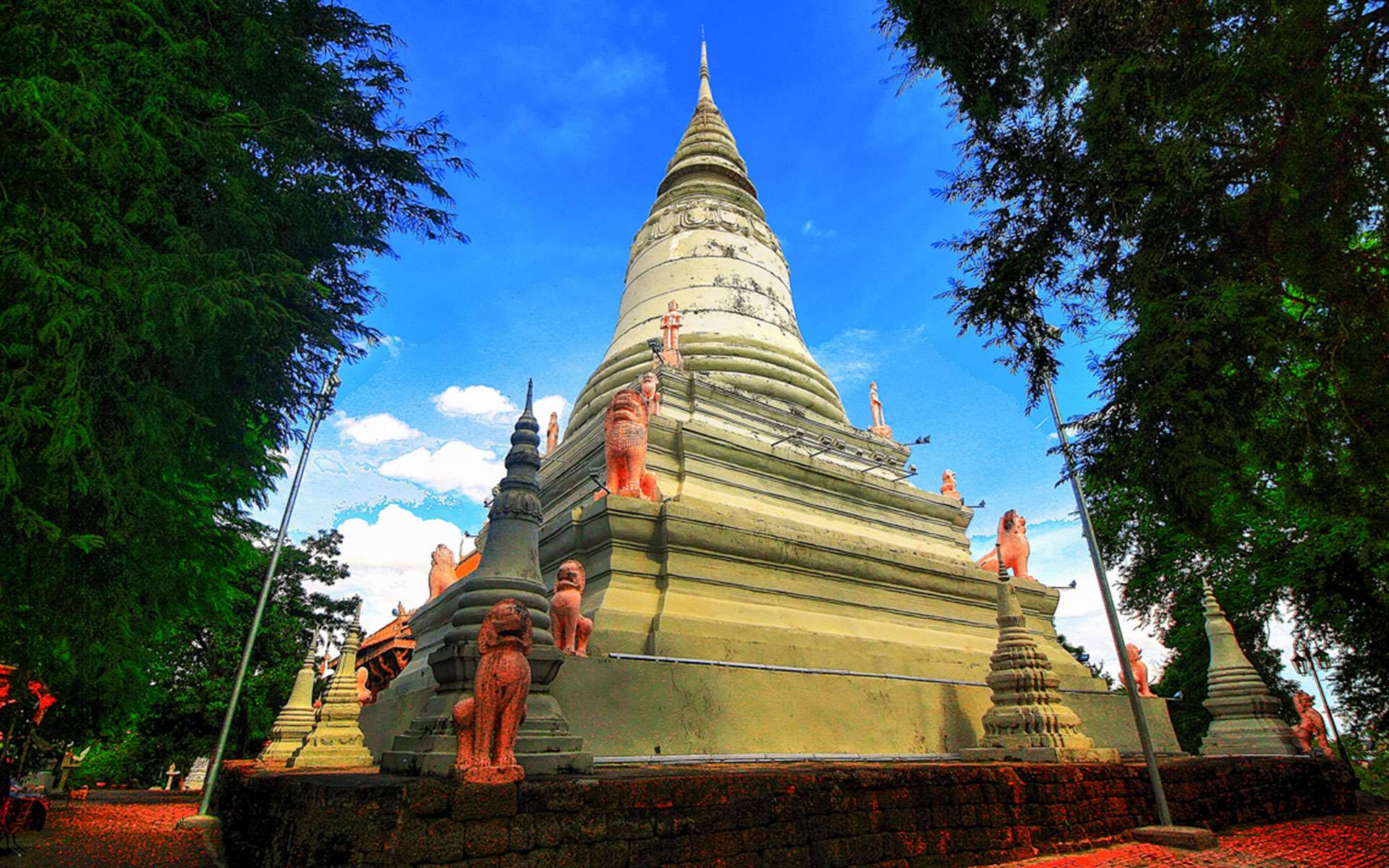 Wat Phnom is the tallest religious structure in Phnom Penh.

The grand eastern staircase guarded by lions and naga balustrades is the main entrance leading to Wat Phnom. The temple sanctuary then was renovated several times in the 19th century and the current one dated from 1926. There is a huge stupa at the west of temple sanctuary, which contains the ashes of King Ponhea Yat. On the southwestern corner of the temple and stupa is a small shrine dedicated to Lady Penh.

Being one of the most important Buddhist temples in the city, Wat Phnom is often busy with locals coming to pray for good luck and success in business and other important life events.
When climbing down the hill to the northwest corner, tourists can pay a visit to the arts and crafts center, where local women and disabled people make and sell ceramics, jewelry, silks and sculptures. The surrounding area offers the pleasant green space to relax and escape from bustling capital for a while.

Named in honour of King Sisowath (1904 – 1927), Sisowath Quay is a 3 km riverfront strip bordering the Mekong River and abutted by the Royal Palace in Phnom Penh. It’s considered as the important commercial public region and home to beautiful colonial-style buildings as well as foreign embassies. With a westernized and multinational vibe, this area is filled with street vendors, restaurants, bars, cafes, shops and hotels. 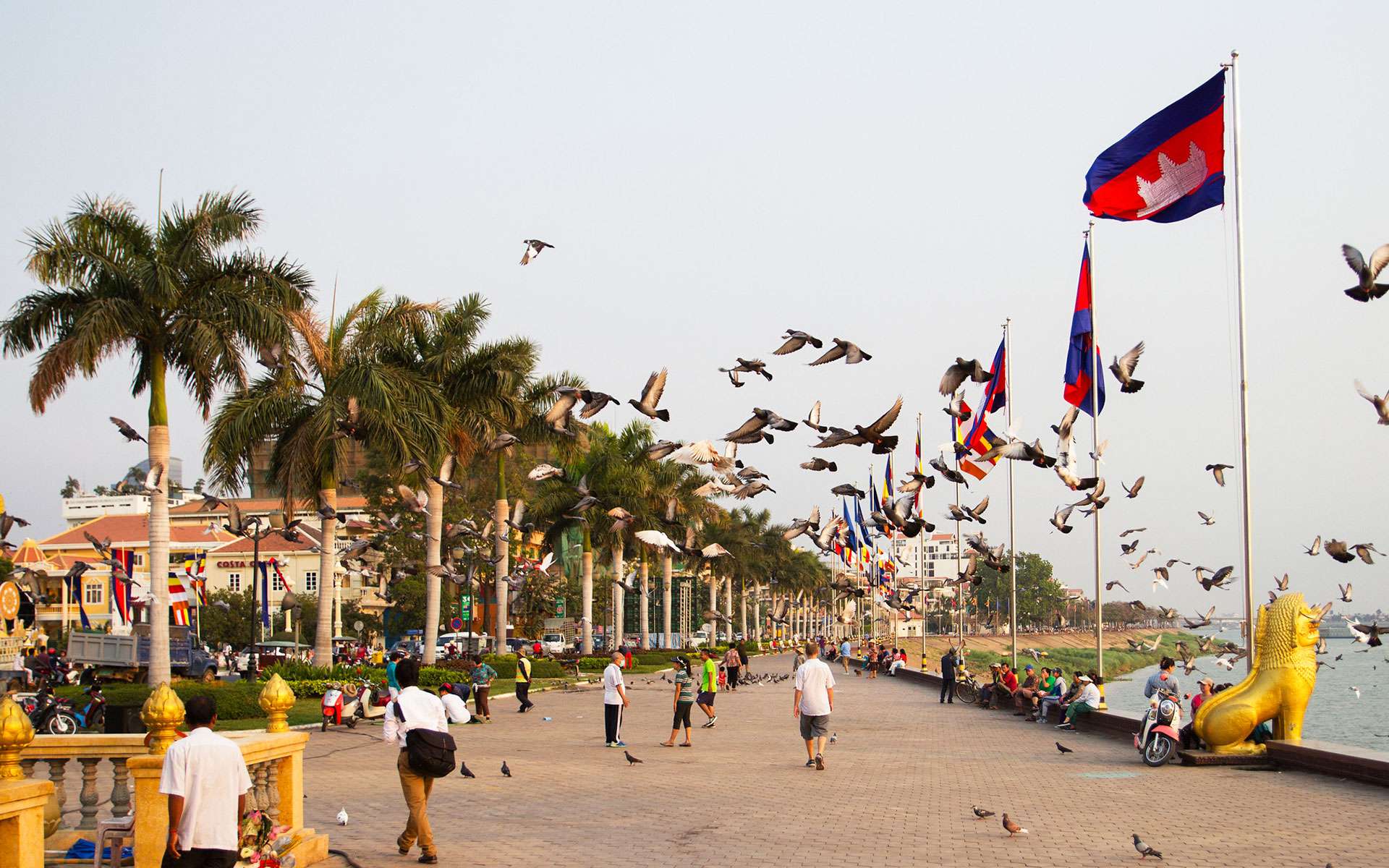 From the early morning, the Quay awakes with exercise sessions and interesting music practiced by “early bird” locals. During the day time, it’s a great place to hang out for both locals and tourists, especially crowded in weekend and public holidays. The portion in front of Royal Palace is used to watch boat races held in Water Festival in the mid-April. If you want to get away from the noisy rush hours of the bustling capital, just join in the sunset cruise departing from the tourist boat dock between 5 pm and 7:30 pm. This is really a relaxing way to soak up the gentle pace of local river life, as well as enjoy the city view from other perspective.

When the sun goes down until midnight, Sisowath Quay become busier with locals getting fit at the outdoor aerobics classes or playing games, and riverside night market opened for sale. Just take a seat at any comfy bench in the boardwalk and observe local nightlife scene. Or sample any delicious local snack offered by street peddlers you stumble on along the way.

Just 2 km south of central town is Kbach Gallery, which was opened in 2017 by a London native – Tony Francis, to promote Cambodian urban and street art scene and its artists. With three galleries covering 400 sq meters of Factory Phnom Penh, Kbach organizes frequent exhibits and competitions where local and international artists have chance to showcase their work and talent. It also cooperate with local schools and organizations to implement meaningful projects such as refresh blank walls by stunning murals of urban art. 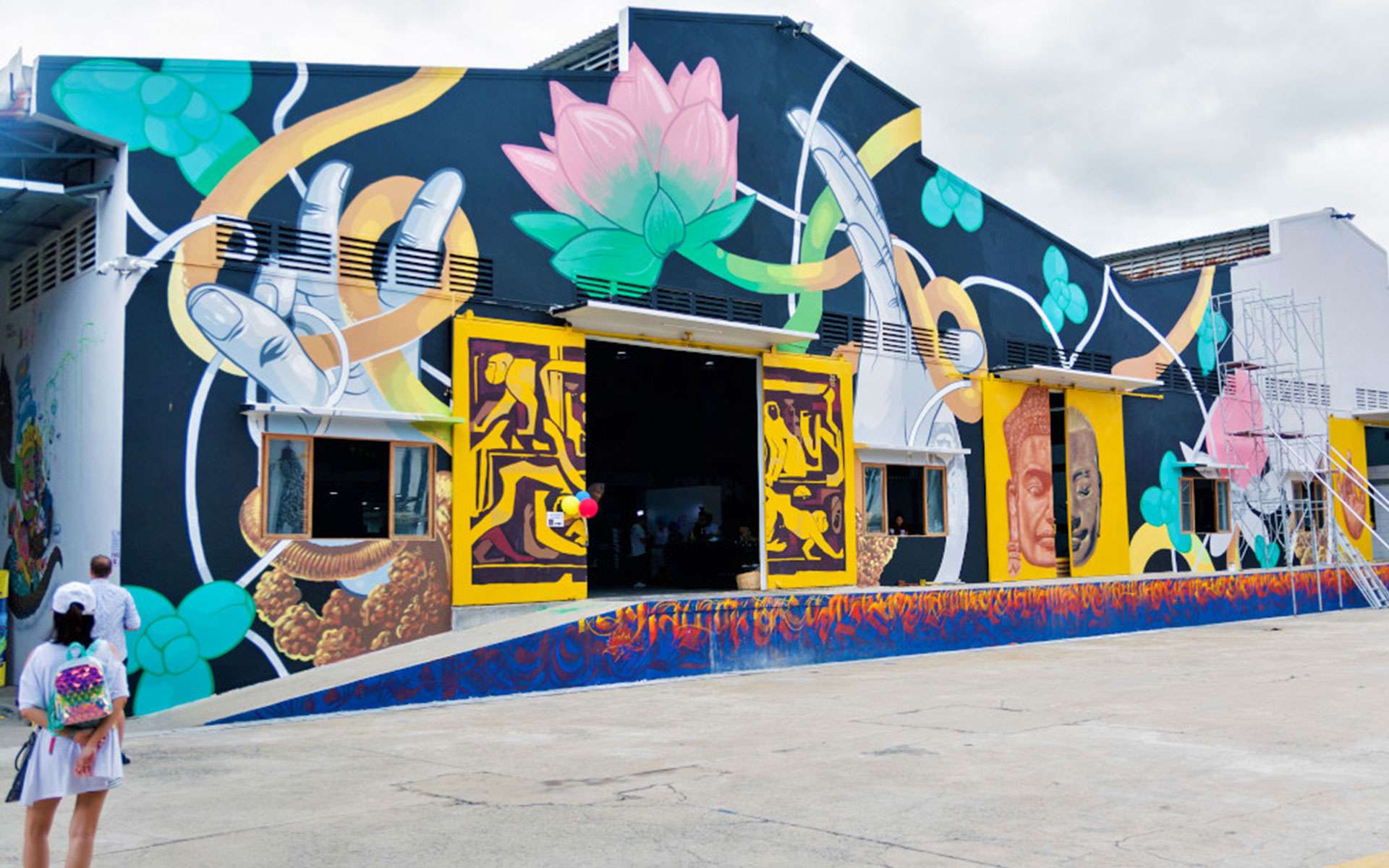 Kbach Gallery is where tourists can admire Cambodian urban and street art scene and its artists’ talents. 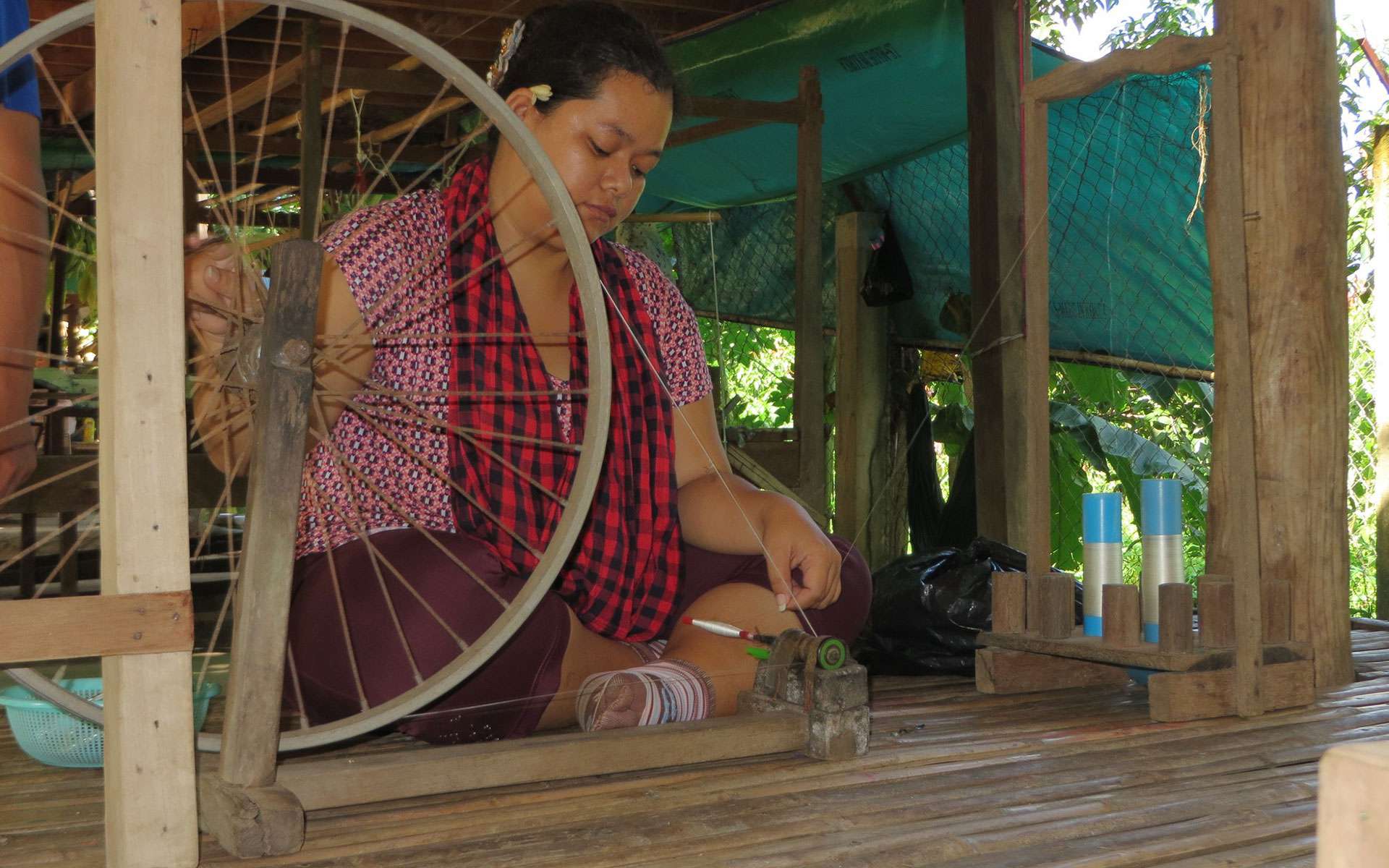 Koh Dach, also known as Silk Island, is a narrow island in the middle of the Mekong River, on the upstream of Phnom Penh. From Phnom Penh, it is just an hour’s journey to Koh Dach, including a short ferry ride. Once in this silk island, tourists can rent bikes at the ferry drop-off point and take a soft biking through rice paddies, and small villages with traditional Cambodian teak wood houses.

Meeting with the local Khmer, tourists can learn about Cambodian silk weaving industry. In weaving villages dotted across the islands, tourists can watch women busy in using handlooms to spin silk while others dye materials to create stunning silk designs and accessories.
Don’t forget to bring your camera as there are plenty of novel things to explore and capture here. 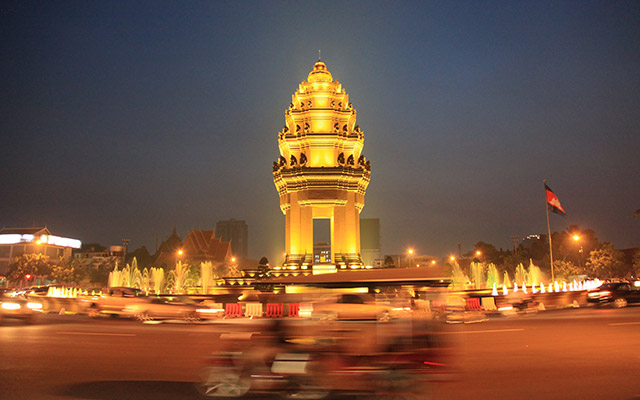 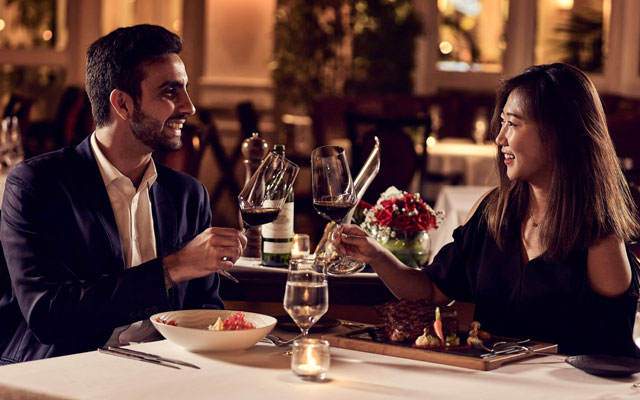 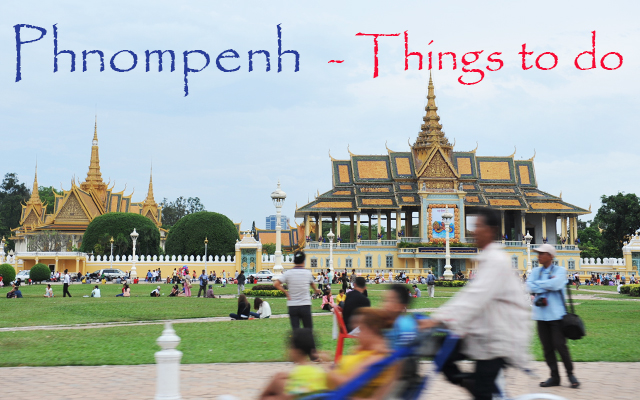 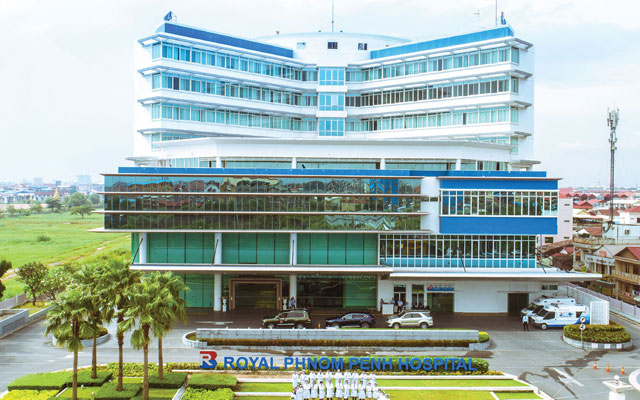 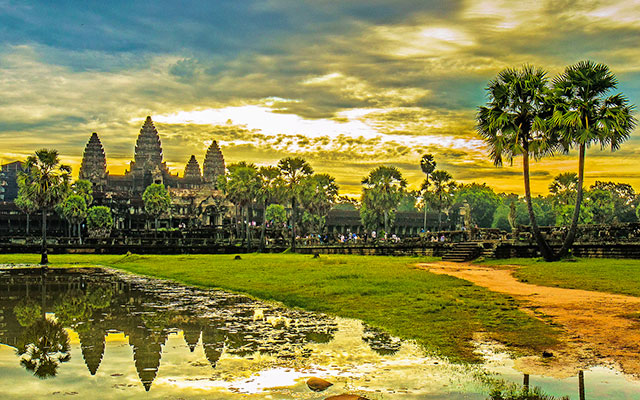 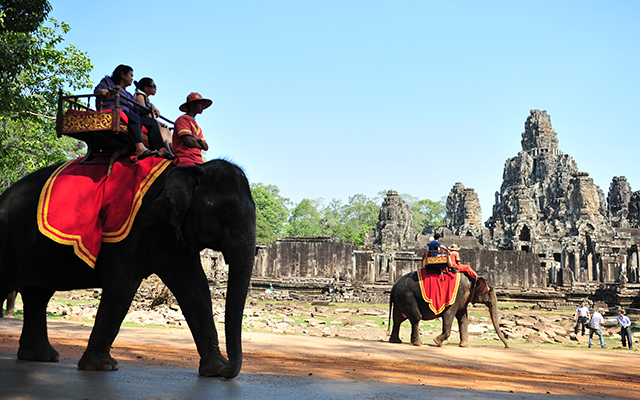