Located in the middle between Vietnam and Thailand in Southeast Asia, Cambodia is a perfect holiday destination which can be visit year-round, depending on what you are looking for. Weather in each month in Cambodia has its own strength and advantages which can probably surprise you when visiting the whole country. In this article, Cambodia Travel will give detailed information about Cambodia weather in January. This is one of the most popular times of the year to explore this tropical destination. Thanks to the temperate climate in January, the visit to Temples of Angkor is much more bearable.

In the month of January, the whole Cambodia experiences good weather conditions with blue skies, pleasant temperature averaging at 26 °C. There is not much chance or barely any rain during this first month of the year.

In Phnom Penh Capital, temperatures usually reach a high of 32°C during daytime, with high heat and humidity and falling into 21°C at night. It’s estimated there are 9 hours of bright sunshine in each day, which counts for 76% of daylight hours in Phnom Penh. Siem Reap also has the similar weather scene with temperatures ranging from 31°C in day time to 19°C at night time.

Be ready to wowed off your feet in Cambodian South Coast and in the Cardamom and Tatai region with undisturbed blue skies and lots of sunshine. With high heat and humidity, average temperature in Sihanouk Ville and nearby islands hovers around 21°C to 31°C. 66% of daylight hours come from 8 hours of bright sunshine each day. On average, it rains at a small amount: 1 to 5 times in January.

Further northeastern direction to mountainous regions of Mondulkiri and Ratanakiri, slightly cooler temperatures fluctuate around 18°C and 21°C from night to day time with moderate heat and humidity. Each day normally has 8 hours of bright sunshine and 3 days have some rain during January.

Suggested Places to visit in January 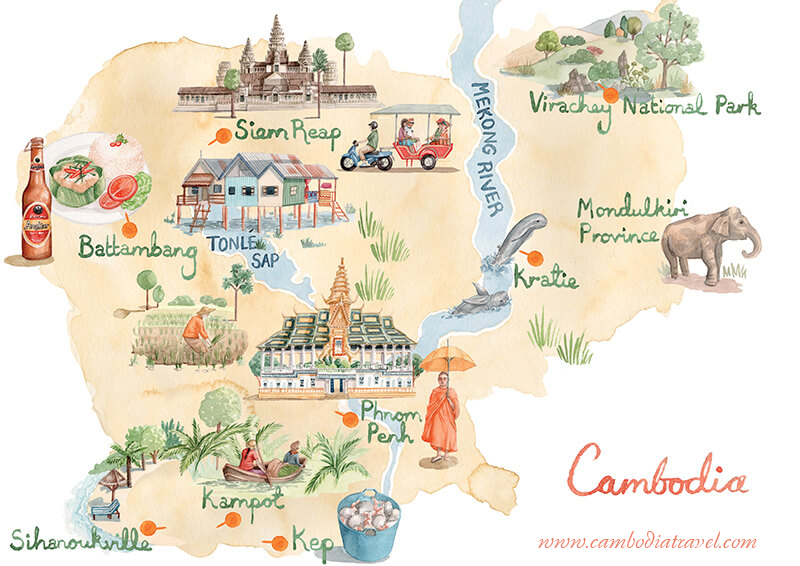 January is one of the most popular times of the year to explore all main tourist sites in Cambodia.

The period between November and February is classified as Cambodia’s high season with cool and dry weather. Among this period, January is traditionally the coldest and best month to visit the country. Thanks to the temperate climate, the visit to Temples of Angkor is much more bearable, although tourists are recommended to find the relief in the shade at noon time.

With low chance of rain in the month of January, beach lovers can bask in the sunshine and swim in the warm sea waters along Sihanouk Ville’s coastlines. Sihanouk Ville is also the entry point to offshore islands of Koh Rong and Koh Rong Sanloem. With dry long days and beautifully warm 28°C temperature, these islands are perfect for water-based activities like swimming, snorkeling or scuba-diving, as well as party from sunrise to sunset.

If crowd is not your thing, swop Sihanouk Ville and party islands for the laid-back Kep’s beaches, or head to the tranquil riverside town of Kampot.
Adventurous travelers are surely happy to know that journey time to Mondulkiri and Ratanakiri is shorter thanks to good road conditions in January. Sunny daytimes and cooler temperatures make adventure activities like trekking into jungles or interact with wildlife in these places are much more pleasant. 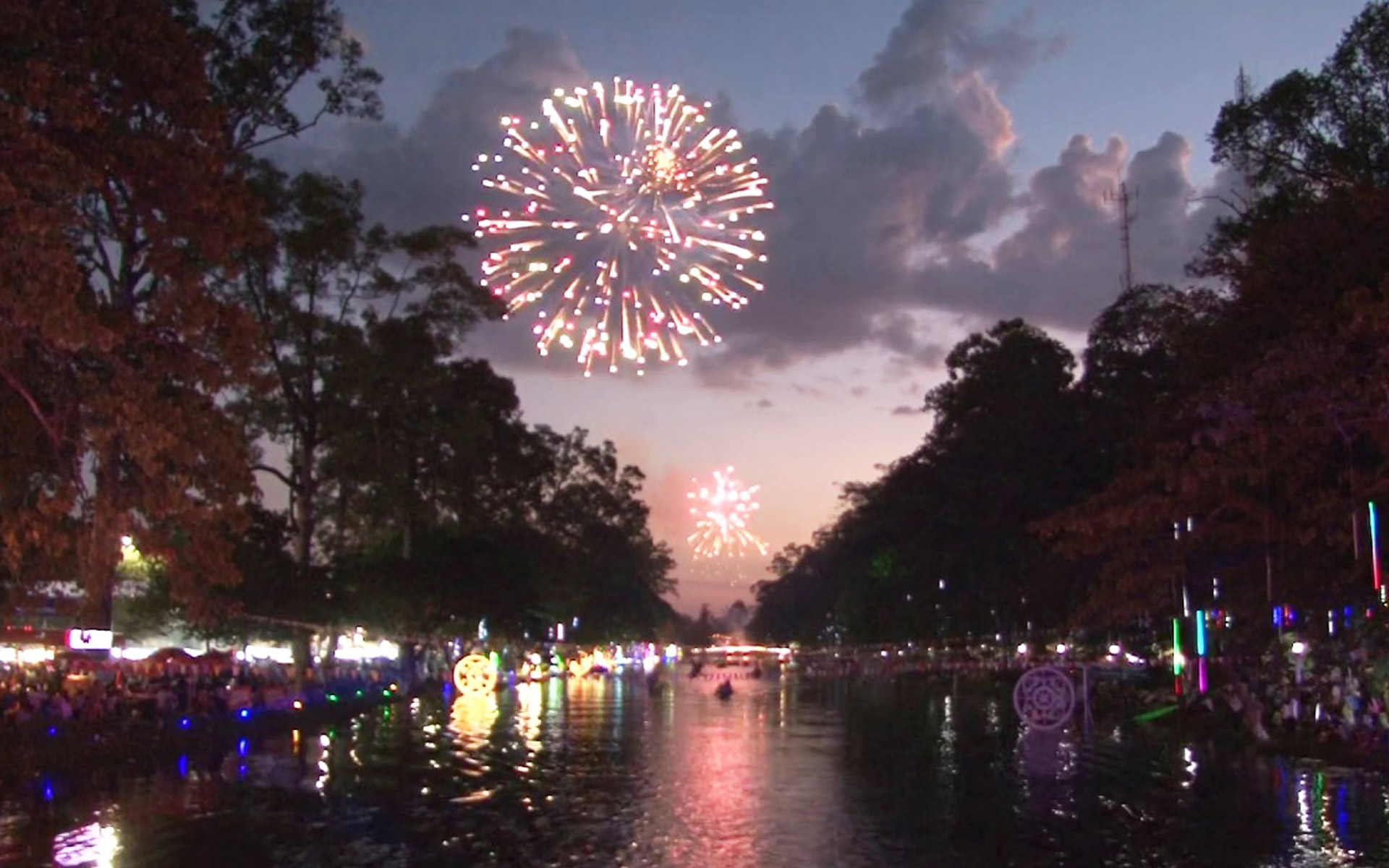 If you happen to be in Cambodia during International New Year’s, then you are in for a great time! Although this New Year Day is not widely celebrated throughout Cambodia, country’s tourist hubs like Phnom Penh, Siem Reap, and Sihanouk Ville host various special events to attract both locals and international visitors.

In Phnom Penh, local residents and visitors gather on the promenade along Sisowath Quay (commonly referred to as Phnom Penh’s Riverside) to watch the colorful firework displays. Rooftop bars lining the stretch secure the best views but you should reserve tables in advance.

If finding yourself in Siem Reap during International New Year’s Eve, you just head straight to Pub Street where party spirits never end, even busier in this special occasion. Tourists flock to the packed stretch of bars to drink, dance and wait for the countdown.

The coastal town of Sihanouk Ville is another great spot to wave goodbye the old year and welcome the new year. Serendipity Beach concentrates many bars with lots of parties and music throughout New Year’s Eve. Tourists can find quieter moments over at Otres Beach where they can stay up and leisurely watch the first sunrise of the year together with their beloved ones. Thousands of local people gather in Cambodia’s Victory Day to remember those who lost their lives during the Khmer Rouge.

Cambodia’s Victory Day (locally known as Thngay Pram-Pi Mak-Ka-Ra) is a yearly celebration to commemorate the fall of Khmer Rouge’s regime on January, 07th 1979. From 1975 to 1979, under the leadership of Pol Pot, the Khmer Rouge set its power in the country and changed the name of Cambodia to Democratic Kampuchea. Pol Pot radically pushed Cambodia towards communism so emptied the cities and forced Cambodians to relocate to labor camps in the countryside.

It is estimated that 1.5 to 2 million people, nearly a quarter of Cambodia’s population in 1975, died by starvation, untreated illnesses and exhaustion from overwork in labour camps. It was not until Vietnamese troops invaded Cambodia on 07 January 1979, which brought an end to the Khmer Rouge. Since then, January 07th 1979 has been considered as the second birthday of Cambodia and officially become National Victory Day.

In contrast with the festivity spirits of International New Year’s Day, Victory over Genocide Day reflects a solemn atmosphere. On this day, Cambodians come together to remind the country of the horrific Khmer Rouge’s regime, as well as acknowledge the importance of freedom and liberty. In Phnom Penh Capital, a gathering is normally held in Koh Pich Convention and Exhibition Centre to mark the momentous event of the fall of the followers of the Communist Party of Kampuchea, and appreciate the Kingdom’s peace, nationwide progress and political stability. Thousands of people gather in this yearly event to remember those who lost their lives during that dark period. 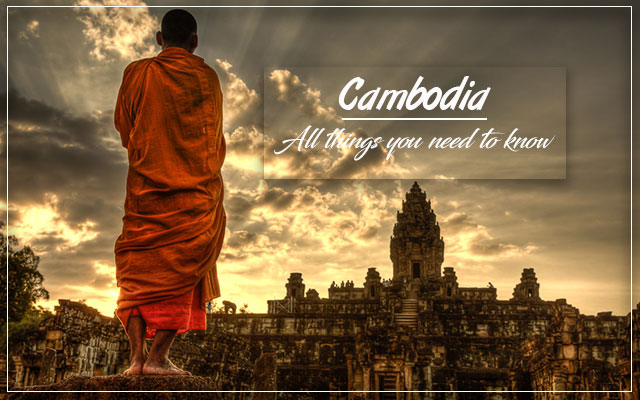 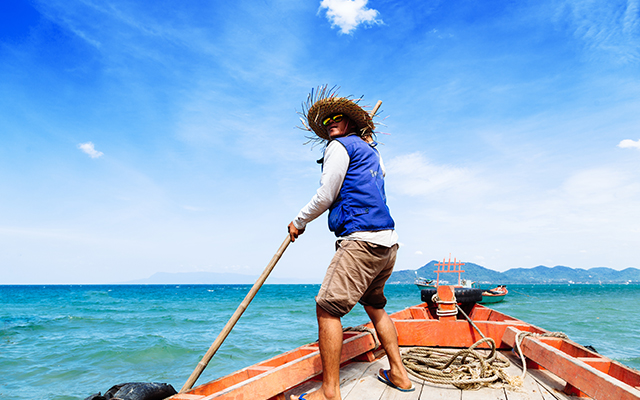